The week before Valentine's Day, we reached out to HSSC teams & players on social media and out at the games for their stories of #HSSCLOVE. The response has been incredible, and we've compiled all the stories below! We hope they give you a smile, and show how friends, family and yes, even love can all be enhanced through sport.

Do you have a story to share with us?
We love receiving stories and profiles of teams, friends, couples and more throughout the year. You may even be featured on our social media or bi-weekly Chalkboard!

Send us an email with your story! 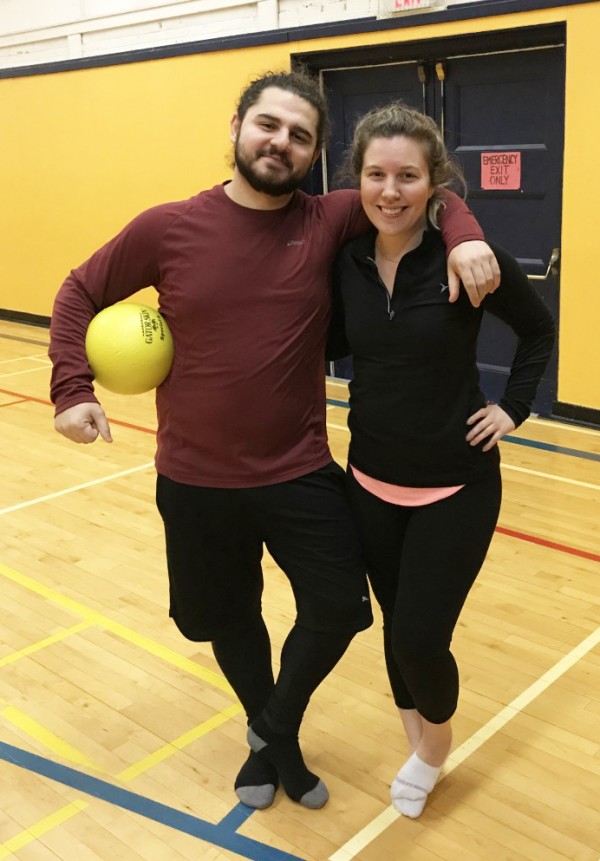 This cute couple met through friends in college, and have been together for 5 years now! They play Dodgeball with HSSC on Wednesdays with their team. 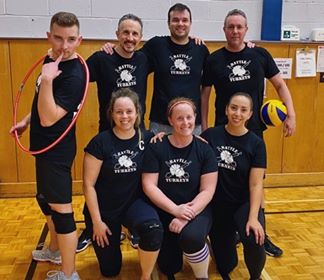 Shooting my shot with HSSC - a story from Julia Woynar of team BATTLE TURKEYS!

I have been a part of the HSSC community for the last 4 years and I cannot express how much I love I have for the organization!

As someone who has always had a crazy love for sport I am so grateful you exist since as an adult it is extremely hard to find quality leagues! You guys have also helped introduce me to new sports (volleyball, dodgeball, etc) and help keep the spark alive for some of my old favourites (ball hockey and soccer).

I have made so many amazing friends through this organization. I look forward to going to my games every week to hang out with my crew, sing and dance to music between volleyball points, and share some laughs.

On a more personal note, HSSC has donated to a fundraiser on my behalf for the past 3 years which I cannot show enough gratitude for. I became interested in the Ride for Cancer when my dad was diagnosed 3 years ago and having the additional support has meant a lot to me when going through the various stages of his diagnosis. Two years ago my dad passed away two weeks before the ride and if I didn’t have my friends (some met through HSSC) then there is no way I would have made it through the 100km ride.

Basically I don’t have enough positive things to say about you guys.
You rock, don’t ever change! 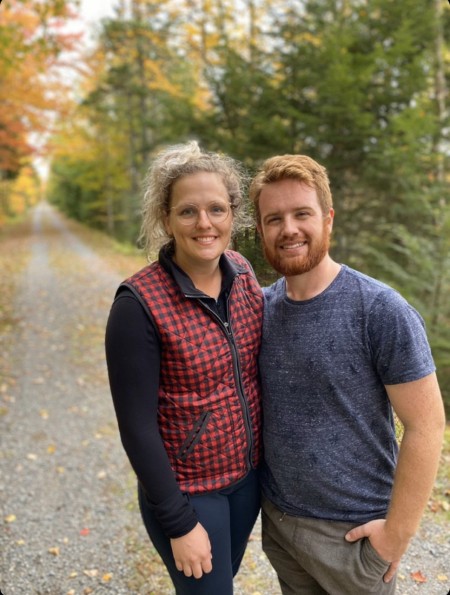 A love letter from Brooke to Brandon and HSSC!

"Brandon & I met in 2016 at coed Floor Hockey on Thursdays @ Stad and started dating in 2018. We are still together today. We probably wouldn’t have met if it wasn’t for HSSC & we are grateful! :)" 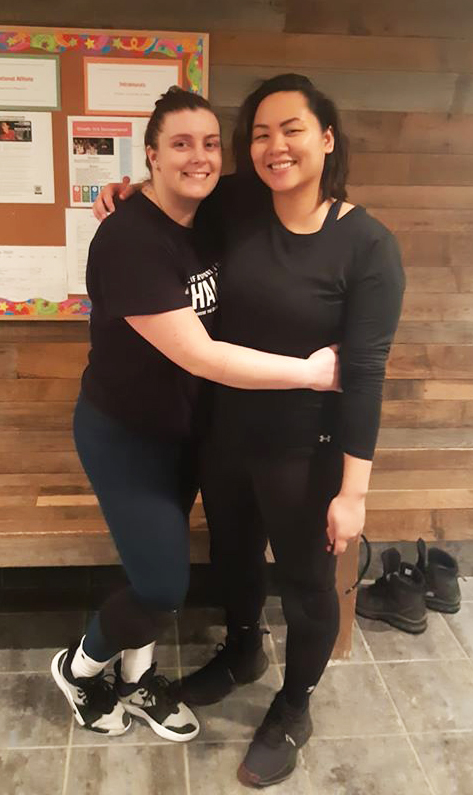 Meet Shannon and Tiffany, the lovebirds who met through the love of Dodgeball!

Shannon started playing HSSC dodgeball with a team of coworkers years ago. While Shannon was playing, a friend on an opposing team asked her to start playing NSD (Nova Scotia Dodgeball). She decided to give it a shot. Once she started playing NSD, she was having trouble adjusting to the playing style... that's where Tiffany came in. Tiffany had been playing with HSSC and NSD for a while so decided to show Shannon the ropes. The two instantly started falling for each other, getting together shortly after. 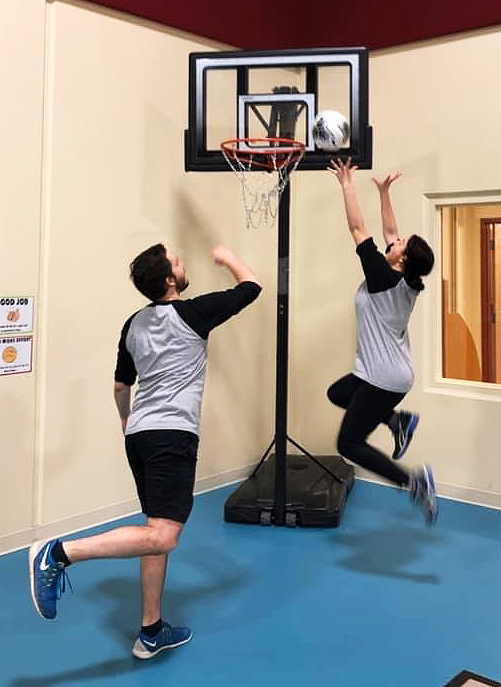 The One With the Two on O Break-A-Way

The power couple of Melissa and Paul were on a two-on-zero in their first basketball game of the All-Sorts-of-Sports season when Paul lobbed up the alley-oop pass to his girlfriend Melissa who would take the basketball and slam down the 360 slam dunk.

Some might say it’s made up, but those closest to the team say it’s 100 percent! 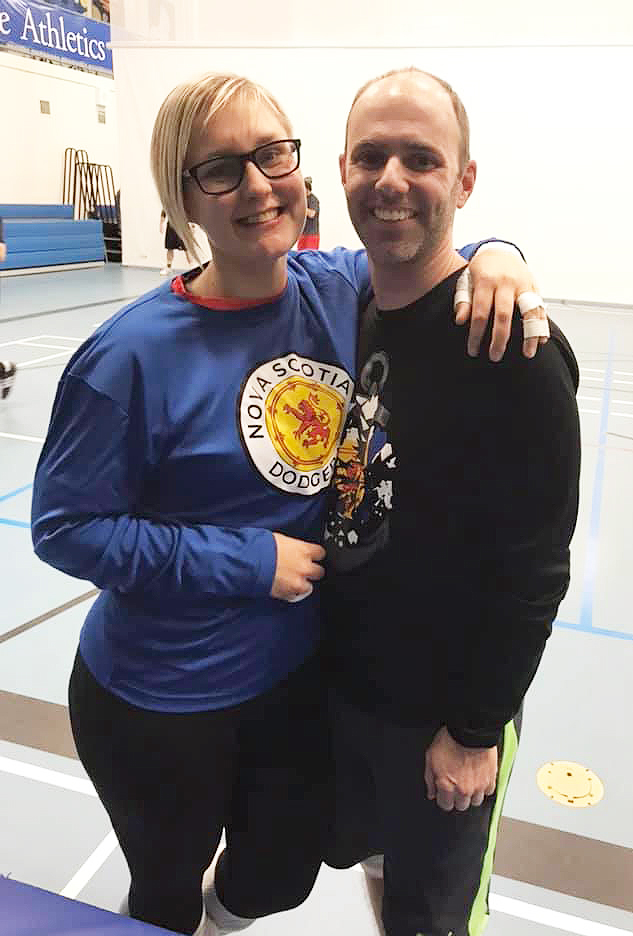 Selena and Clint are one of HSSC’s best Dodgeball couples!

They met playing dodgeball through a mutual friend during PEI’s first dodgeball tournament!! When asked what their favourite thing about playing together is, they answered that it was awesome to support and watch each other, although it is even more fun to play AGAINST each other!

These happy lovebirds have been playing for almost 10 years! Recently married, their team has evolved over the years but they’re still each other’s #1 fan. 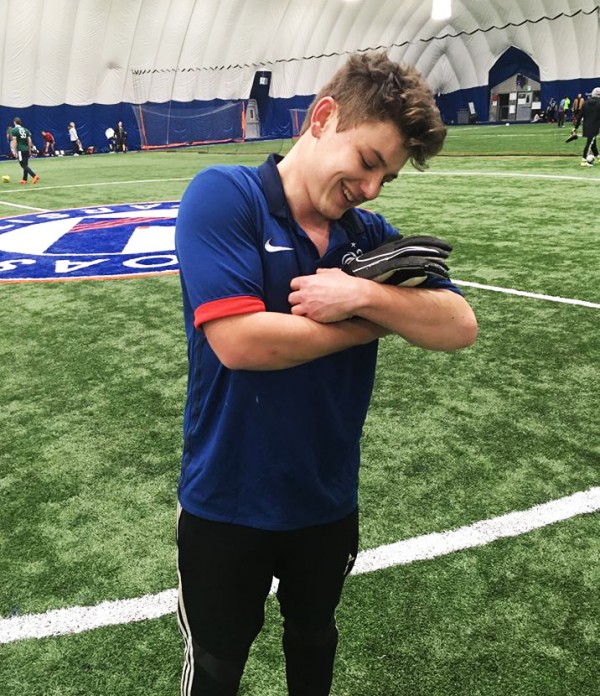 Love Lost, then Found - Written by David the GC (You'll want to sit down for this one.)

Many of us dream of one day finding that perfect soulmate; that elusive partner in crime that completes us in every way. It's a daunting task, when you consider the sheer number of possibilities out there. So many factors have to be just right, and some days it feels like it'll take a miracle to ever meet The One, but sit back, dear reader, for this is a tale of love against all odds.

Meet John. Definitely born sometime after 1960, he has been a committed and enthusiastic HSSC athlete for at least 4 weeks, maybe more. His hobbies include collecting blue polo shirts, stylish haircuts, and bread, probably. As a rising star in the highly competitive Monday night turf soccer league, at a glance, you might think John has it all, and you would be right. But in his heart, he knew that something was missing*.

Meet Glove. Originally from Taiwan, but emigrated to Canada in 2019, they are biracial, Nike-branded goalie gloves, size Medium. In their spare time, they like to practice mindfulness, meditation, and they love high fives. Glove knew that they always wanted a partner that would support them emotionally, as well as physically, and have been searching for that connection ever since they came of age**.

Star-crossed lovers weep in jealousy at the meet-cute of our two heroes, and indeed, I need not bore you with the details of their courtship. In a classic tale of Boy meets Glove, Glove sits impassively on shelf at SportChek, Boy is instantly smitten, Glove plays hard to get, Boy exchanges approximately 29.99 plus sales tax, Glove is won over by this display of wealth and generosity, Boy and Glove live happily ever after, but not before a healthy discussion between the two about how a relationship is built on much more than a monetary transaction, and in fact, this part of the story is purely coincidental to their instant mutual attraction. It's 2020, people - get with it.

But alas, the happily ever after lasted a mere two weeks, and trouble befell John and Glove. After a hard fought (but very cleanly played, and enjoyed by all participants) game with the Halifax Sport And Social Club, the two were celebrating their victory, when another team came to them with a problem. One of their teammates was ill, and they needed a substitution. Being the selfless couple that they are, both John and Glove volunteered to stay and help, but after some muttered comments about "No way am I putting my hand in you, buddy", Glove was chosen to sub with the next team.

John stayed up all that night, and the next, waiting for Glove to return, but to no avail. Unbeknownst to him, Glove had taken a wrong turn leaving the East Coast Varsity Dome, and had ended up in the Lost and Found box. At the next game, John was distraught. His play began to suffer, and in the halftime huddle, his team started to fill out preliminary paperwork to trade him to the minor leagues until he could get his personal life back on track. Things couldn't get much worse for Glove or John.

This tragic turn of events was brought to the attention of one of the extremely competent, clever (and single) Game Coordinators, who immediately set out to look for the missing Glove. Prompted by multiple passionate phone calls from a desperate**** John, the handsome GC vowed to leave no stone unturned in his search, and indeed, it was not a stone, but a navy children's hoodie with the name "Madison" on the arm that eventually uncovered the lost Glove from the box.

Their reunion this week was a sight to behold. Both teams lined the field, creating a corridor through which our two heroes rushed to meet. Trumpets played, and a car alarm went off (possibly unrelated, but it certainly added to the joyous cacophony), as they spent several minutes lost in each other's presence. Glove was later quoted as saying, "It was the hardest week of my life, but I'm so glad to be back with my one and only" and a tear-stained John chimed in, "You're a real keeper, Glove!"

And while there may be other stories of love this week, some new, and some old, it's important to remember that love comes in all shapes and sizes, but when it's right, it fits like a glove.

*So in a sense, you were also sort of wrong, if you just thought he had it all. Don't worry, nobody's keeping score***.

**1 Human Year = 7 Dog Years = 20 Glove Years. Everyone in this romantic epic is above the age of consent in Nova Scotia.

***Although if they were, it would be Story:1 You: 0. Better hope you get some spirit points!

****But not too desperate. Like, just a normal desperation level if your partner had been missing for a week with no trace. Not quite full on panic, but a little bit more than Ben Affleck in Gone Girl.